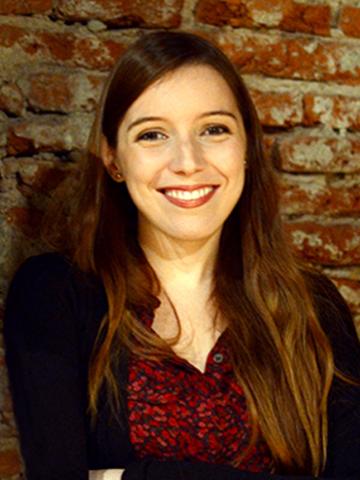 Maite was born in Montevideo, Uruguay in 1988. She is a composer, choir conductor and singer. Maite has a degree in Music, specialized in Choral Conducting, from the School of Music of the University of the Republic, where she also studied Composition.

Maite founded and conducts “Ensamble Oikos”, which performs a selection of a cappella music from the XXI and XX century related to nature and to the song form. She also conducts different amateur choirs, for which she makes choral arrangements of popular and folk regional music.

Maite has studied composition; in 2010 her choral piece “El silencio” won the 1st prize of the Contest of Composition of the Choir of the Music School. Besides academic composition, she is a songwriter and in 2015 she publishes her first album called “En el movimiento” and is working on her next album called “Improsiciones”. As a choral singer she participated three times in the World Youth Choir, and one in the JSB Ensamble of the Stuttgart Bach Academy.

Maite also studied visual Arts at the Art School of the University of the Republic. In 2012 she made an exhibit of her paintings called “Teclas”. She has studied the relationships within music and visual arts. Besides this since 2014 she is part of a project of the University dedicated to research the connection between dancing and music, developing experiences and small pieces where the music and the dance are equally intervening in the aesthetic creation.