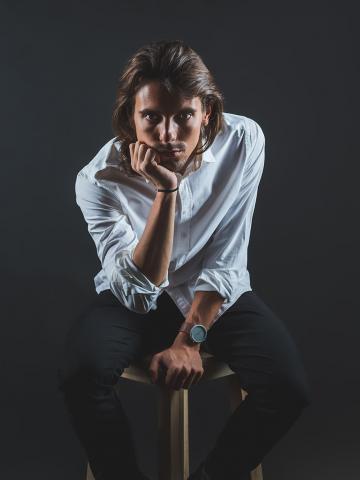 Alejandro is pure energy and electricity. In fact, another Time Ensemble member baptized him as MPU (Mobile Party Unit).

Alejandro was born 27 years ago in springtime, in the beautiful city of Madrid. With his parents very used to sing traditional music duetos, his tenor spirit was nurtured from an early age. In fact, he uses to state: “my first memory is a lullaby mi father used to sing me”. He started singing in choirs when he was a teenager, and after he finished his degree finally decided to focus on getting into the singing conservatory and into a really good choir... and he succedeed, performing a wide range of music for the next 4 years: from being conducted a Mahler symphony by Neville Marriner to share the stage with The Rolling Stones in their Spanish tour.

But at some point he accidentally discovered the medieval music and never was the same. That is why in 2017, with another 3 musicians, Alejandro founded Timpanum Ensemble, and he did not realize then that he was starting a complex cultural artifact that has made him happier and prouder than anything else.

However, there is plenty of enjoyable music beyond Council of Trent, and Alejandro has not only focused in medieval. In the last three years he has studied Jazz and Flamenco singing and performed as a theater actor. Besides that, he has continued singing in choirs, and have participated in some international projects, like Israel and Marktoberdorf sessions with Common Ground Voices in 2018 and 2019, and the World Youth Choir China and Mongolia sessions in 2018.